A bit like figures these are high up on my personal list of things that can ruin any scene. The pitfalls for me include:

Avoiding the cliche means ignoring the Airfix kits that would have been my first choice twenty years ago, although Phil Parker has shown how they can be personalised very successfully.

It seems the current cliche is the BaseToys Bantam Karrier in various guises. I can understand  why because it is that little bit unusual.

I'm lucky in having a couple of photos of the goods yard on the TVR taken during the period I'm modelling which show the lorries that were frequenting them. In theory if I spent long enough trawling through the component parts from Road Transport Images I could probably come up with a perfect match. That, in any case is the long term plan.

In the meantime I've gone for a couple of AEC's. I snapped up EFE Lloyds of Ludlow  Mk V Mammoth simply because it isn't often I see a vehicle in an appropriate livery for the area the layout is set in. Looking at in the flesh it is clear it needs a new body to be acceptable. At that point it become an interesting exercise in evaluating Value For Money to compare it with the other AEC, a Base Toys Mercury 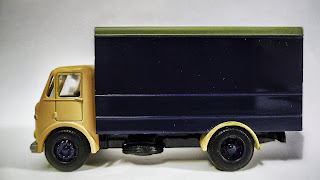 It lacks the high quality printing on the EFE version, and a few details, but the basics are there, and at a bargain £2.50 stripping it down and repainting plain green isn't going to seem like sacrilege. Just look at that thickly applied glossy black paint on the chassis. Re-glazing is a challenge I'm not looking forward too.

The intention is for the lorry to sit right at the front of the layout, as another layer in the disguise of the "bitsa station", so getting the right level of detail is going to be a balancing act. It will have to look right, but I don't want to draw attention to it.