I would be lying if I didn't admit to being a little disappointed with progress this week. I had really hoped to have started work on the landscaping side of things . I suspect though that in reality I've moved forward a long way, even if progress on the ground has been less evident.

Bridge
The Mk 1 bridge is built, and is in the process of being upgraded with an alternative set of textures that seem to me to be a better combination than my original choice. The alternative brick work I've gone for is I think an all round improvement. The stone work has been a more subjective choice. The ashlar I started with is probably not a bad match for the prototype, but just didn't seem to work visually.in the foreground location. I've gone for a much softer rubble texture now which not only looks less like paper and more like stone but which also, I think, provides a less harsh visual break at the end of the layout. Incidentally part of the problem I'm having with the stone effect papers seems to be a result of the complex issue of colour profiling the printer so the colour it prints matches the colour things are meant to be.

Station Buildings
I've also been doing a lot of thinking, and 3d sketching, of other possible buildings. In particular I've decided the structure on the platform is definitely going to be one of the lampshed/urinals, I've been toying with having one of the smaller TVR weighbridges in the goods yard. I like the idea of the weighbridge, but I'm struggling to find a location for it that works with the other buildings as a composition. It feels like it should make sense to have some focus of attention in the centre foreground since all the other structures are up close to the backscene but the mock ups suggests otherwise. 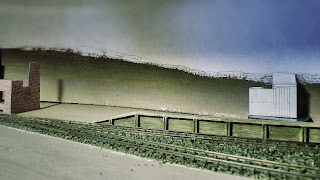 Signal Box
As the picture shows I've also made a start on the signal box.Or at least I've made a start on mocking up the signal box. After a few experiments in construction techniques this week I'm more confident that after tackling a couple more buildings I should be able to produce a basic model of it. Like the bridge I'm not expecting the first version to be the definitive version. It is becoming obvious that this is the key structure in the scene for a number of reasons, including its size, location and colouring. I won't deny there are times when I think it would be easier to just throw together the Ratio kit or to chop down the Wills one and replace the lower storey timbering with brick work.

Getting the signal box right is probably the point at which I decide switching to building the next version of the layout to EM gauge is justified.

Backscene
The photo also shows I've blocked in the backscene. This is the first time I've used a curved backscene and even though, like everything else on the layout, it is as about as simple as you can get it, it has still taxed my mind trying to work out what will or won't work. The big difficulty is representing horizontal straight lines. I've also got very little height to work with in which to convey a sense of distance and whereas at the bridge end the back scene will be biased towards foreground by the time it gets to the station it needs to represent the far distance That is another reason to stick with the larger signal box to disguise that transition.

Lighting
I was hoping to get hold of an IKEA Dioder flexible strip LED light which would both follow the curve of the backscene and also has the ability to be set to different colours, which I thought might be useful to compensate for the lighting in my office being very changeable and  from a real mess of sources with different colour temperatures.

Since they didn't have any in stock I've compromised in the short term with the much much cheaper Ledberg which is adequate for now.

Track and Electrics
So one of the reasons progress slowed last month was because I broke my Heath Robinson linkage between the DPDT switch and the point tiebar. This should have been a simple job to fix, but it is an important one because I don't want to have to keep turning the baseboard on tis side or upside down to work on it once the scenics start going into place. I say it should have been simple, and it would have been had I not had a little accident with the superglue....