A couple of thoughts have been kicking around my mind today.

The first is that I need a more lateral approach to the sector plate idea, or else it is going to take up a disproportionate amount of space when the layout is assembled.   I think the solution to this has been hiding from me in plain sight for the last few weeks. I think the way ahead lies with a combination of  Jack Trollope's "fiddlestick" idea for a micro layout  combined with the Iain Rice mini L girder sub base to produce a slide out section on which a sector plate can be mounted when the line is in use.At the moment I'm trying to avoid over complicating the design.

The other thought, having built one 4' x 2' baseboard is whether or not to build a layout that would just fit in that space as another stepping stone

It is based on an idea I had years ago for a OO9 layout based on Devils Bridge station on the VoR railway.. I've always like the idea of building a layout that provides a natural viewpoint that isn't square on and  I think this plan might just work, with a 16" long traverser hidden by the bridge just long enough to take a pannier and a short bogie coach.

Having my half scale baseboard to hand I mocked up a N gauge version to see how the angles actually worked out. 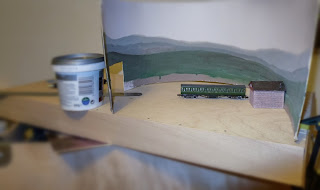 Along the way I ended up with that very curvaceous backscene and a suspicion that the way to make it work would be to do away with points altogether  and have two sector plates, with one short one accessed via a hole in the backscene hidden by the good shed, as it is on Apa Valley. 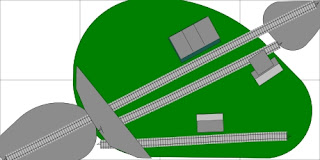 You know in N gauge that could fit into an Apa box. 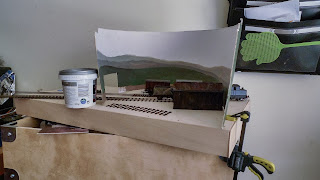