I'm a big fan of the Scalescenes range, both the individual textures and the kits. The range is now extending to including almost complete boxfile layouts, and I'm really excited about the latest canalside one. Not least because it fits in with my plans for a larger version of a similar scene.

There are two things, in particular, I want to mention.

The first is the backscene. I love that John has chosen a misty autumnal view, and one that blends so well with the low relief elements.  Unfortunately, for me, it is very obviously a modern shot, so I'm either going to have to spend ages backdating it in Photoshop or I'll have to find something similar in my personal photo library.

The second is the barge kit included as a free extra. For me this sums up Scalescenes. It involves some very clever design work, especially around forming the hull shape.  The price for that is you really do have to build it accurately, but then part of the joy of Scalescenes is the low cost, in both time and money, of throwing a piece away and starting again if it isn't right first time.

I have to be honest that I made a couple of early mistakes that meant my first build of it was always going to be flawed, though I have corrected most of the obvious problems this photo shows. 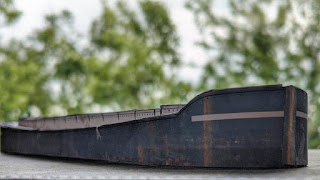 I decided to carry on with the build to understand how the design worked so I could be clear on what I needed to do differently on future builds.

The construction technique will be very familiar to anyone familiar with the simple balsawood model boat designs of Glynn  Guest,  which I've always enjoyed building.. So next time I think I'll build it as I've built those in the past. That means adopting a slightly different order of doing things, which I hope will be easily repeatable, because I intend to build a number of these.

I'm not a purist when it comes to using just card for card models, so I'm going to sort out what detailing parts I can get from the likes of  Langley. I also want to make sure I'm building a model of a barge, not just copying the original model. There a few areas where I feel the use of card has possibly compromised the design, especially the deck, hold and coaming. I'm also less than convinced by the light grey colour choice for those parts. So the fate of this version will include some experiments with paint.

As for the overall design of the barge, I'm not quite sure if it has a prototype. Although it is a dumb barge there is something about the sheer and the stern that is suggestive of a powered craft, and I suspect a few people will add a wheelhouse and engine room, possibly shortening the hold a little to suit.

Incidentally, there is a very active Scalescenes Modellers Group on FB.