Last year I was quite disappointed with the local Spalding MRC show, because to my mind it didn't come up to their usual standard.

It would have been easy not to go this year, especially when several of the layouts had the suffix Depot or TMD, which isn't a universal sign of quality.

Before we go any further I'm glad to say my decision to go again this year was a good one. My bad decision was about cameras.  It is a long story, but don't trust the saying that the best camera is the one you have with you. Because I was disappointed last year I didn't bother taking my reliable Fujis that also perform at model railway shows. Instead, I thought I would rely on my Sony RX100. Now there are times when that little camera can work miracles, but an exhibition hall is somewhere it struggles big time. On this occasion, it wasn't helped by a change of prescription for my glasses, which meant I was struggling to work out the right diopter adjustment and relying more on on-screen information than gut feel. Big mistake.

And to compound it all, I was using a new camera phone, a Pixel 4. This isn't the place to go into detail a mobile phone review. To cut to the chase, I love the camera capability it has, but it is obvious I'm also still learning how to use it.

The net result is my worst ever ratio of shareable shots from an exhibition, which is a real shame, and means some layouts I'll mention aren't supported by a photo. In fact with my first draft, I'm leaving photos out altogether.

First of all, some general observations. It remains a really friendly show where it is easy even for an anti-social g*t like me to become involved in conversations with punters and operators. The free guide was 76, yes, 76 pages! Trade stands seemed buzzing but not busy in terms of cash changing hands, but to be honest this is mostly a show for box shifters, so I didn't hang around them except to get past them to the next layout.

As usual, a sign saying a layout had been in RM or CM seemed to result in a crowd, as did the big layouts such as Grantham and James Street. You can imagine Grantham was popular because of the area, but, whilst not my thing, I think a big range of modellers could appreciate it. James Street is perhaps a touch more gimmicky, but well done. It also highlighted that N gauge layouts, in general, seemed very very popular with the audience, and this year all of them were of a high quality, even if one or two weren't what appeals to me.

Looking at narrow gauge layouts, again they were all quite good. I'll come back to one later in discussing my best of show assessment, but Launceston was by far the best OO9 layout, and  Zauberwaldbahn was a nice example of continental O16.5. The Winter setting of Great White River stayed just the right side of twee,

It was nice to see an Australian layout, South Walton. Another good example of N gauge. I really need another visit to Australia, but at least next year I'm scheduled to speak in NZ.

As for those feared TMD and depot layouts, I rather liked the O gauge Ladeside Depot. The locos were very good indeed. 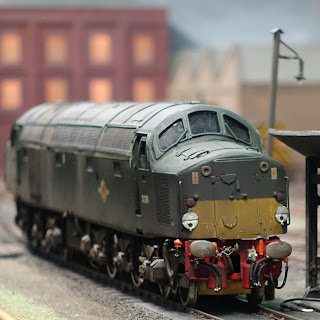 Webbs's Wharf and Wolds Way were good examples of relatively small but well-presented layouts in, respectively 7mm and 4mm. And the Iraq diorama was a brilliant if over-busy, use of forced perspective. So good, in fact, it took a while to be aware that is what it was. 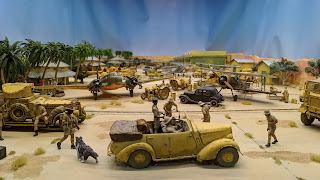 A quick aside before I select, or try to, my layout of the day. I've been reconsidering couplings recently. My conclusion after today is that it is a close-run thing between DGs and Kadees. I was surprised by how unobtrusive kadees can appear. They might just win out.

I'm really struggling with my layout of the day. I loved the 3mm Heybridge Wharf with its hints of the Wisbech & Upwell,  and its use of a Tanat Valley goods shed, except, of course, the combination of the two seemed jarring to me of all people, having a foot in both camps. 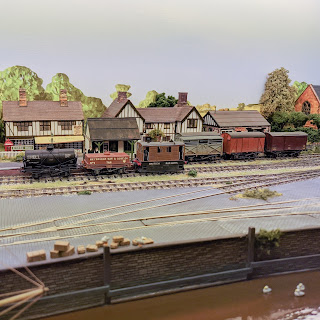 So for me the winner by a whisker was the Spanish based Ferrocarrial San Maria. 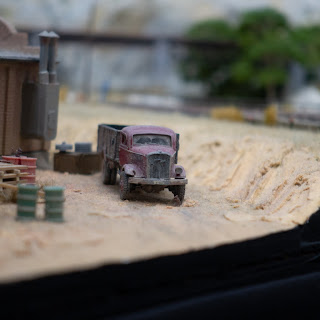 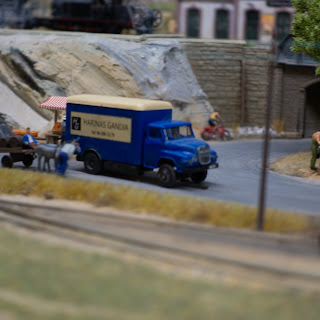 It had a lot going for it: