The Art of the Possible

The new building is far from ready for use, but I thought it would provide a safer refuge for the baseboards of The Art of Compromise than either of the sheds have been. So here it is in its new home, and despite the ravages of mice over the last five years there are still substantial remnants of my Templot plan in place. 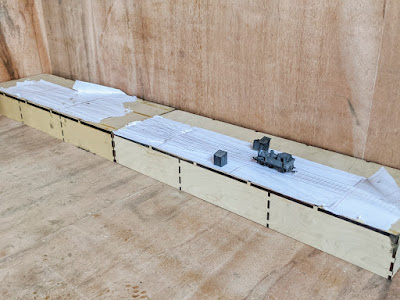 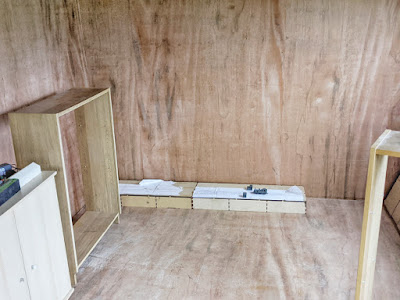 A lot has changed in those five years.


The original idea, to save you trawling through old posts, was to take a break from the somewhat down at heel Tanat Valley and then come back to revisit it both refreshed from the change and having improved my skills enough to make the investment in a new version worthwhile. TAoC had always been one of my favourite plans, so seemed an ideal candidate. When not in use it could be displayed as two separate dioramas in my then office/workshop and then combined with the fiddle yard to be operated in the library.

Conventional wisdom seems to be that the layout can't actually be built as Roy Link originally drew it. As a result, most versions of TAoC are modified to a greater or lesser degree. I wanted to prove the original design was feasible using either the models he specified or their current equivalents.  In fact, I wanted to go beyond that and show it was possible to build it with handbuilt EM gauge rather than with Peco Setrack points. That would also provide the opportunity to test out EM conversions as I got round to them. An additional benefit, at the back of my mind, was that I could later replace the scenery with updated TVR structures as a halfway house to the next full-blown TVR layout.

So what has changed and where am I now?

Well obviously we moved house, and I built a  7 1/4" gauge railway. Modelling has been restricted to the OO9 micro layout to experiment with the new generation of 3D printed loco kits and beginning to dabble in 7/8ths scale. I've been building up a small collection of recent RTR OO gauge releases as well, some for eventual conversion to EM, and some for an OO dockside micro layout.

The new building gives me the space to keep a layout like TAoC, or even larger permanently set up, which is a nice plus. On the negative side, I seem to have less free time than ever thanks to the garden and animals, never mind work.

Then there are the developments in the hobby, such as the rise in 3D printing and laser cutting, and in particular the fine-scale bullhead track from Peco in both OO and, via the EMGS, EM.

Oh yes, and Chirs Ford built his version of the TAoC using a very similar philosophy

So the options I'm considering:

Carrying on with the original plan for TAoC but using Peco finescale track in either OO or EM. If I went down the OO route it would let me exploit some of my RTR stock until it is converted. I could build a small Apa Valley type micro layout in EM to test any stock I convert to EM in the meantime

Keeping very close to the original plan, but using 18" wide baseboards, primarily to allow a little foreground into the model and protect the running line from curious fingers. That would swing the pendulum back to EM. I could reuse the original baseboards for an N gauge version of Minories.

And, of course, even if I go for the first of these options, I could still build Minories on the baseboards at a later date.