The purpose of life, railways and everything

Well, the purpose of an agricultural tramway is to carry agricultural produce. The goats took that into their own hands by destroying the entirety of my vegetable plot.  Meanwhile, timber and coal traffic has been disrupted by the end of the "tramway" being lifted for my wife's goat-related deforestation project*. A project that has been balanced by hedge planting on my part but which means I need to reinstitute  20m of track in the Spring.

But then in the Spring, we are getting a different breed of goat, and that does definitely mean having to remove a stand of conifers. Conifers that currently hide both the big metal engine shed and the stock siding. That is a Bad Thing in the language of 1066 and All That. The upside is it lets me remove the infamous 8ft radius reverse curve, which also means it is feasible to fit in a second road into the big metal engine shed.

It is  Bad Thing that to do that means relaying another 40m of track, building an extra point and altering the geometry of one of the existing points.

It is a Good Thing, I suppose, that goats generate their own kind of agricultural traffic. Mucking out the goat shed produces a rich, and ripe, source of compost. The input to this process is bales of hay and straw, but I think I'm going to need longer wagons... 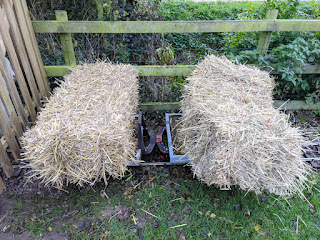 * She didn't check in advance that whilst certain shrubs are poisonous to goats, goats seem to be aware of this and so don't eat them.