Well what a surprise. So what to do?

Having a lie in was number one priority, followed by a list of chores, but after that the aim is to cut the wood for the baseboards of Llanrhaiadr Mochnant, and a smaller board to use for test building my first ply and rivet EM gauge track in thirty two years.

And just for a change I might rebuild the track bed of the garden railway, which hasn't seen a single train run this year.

Meanwhile I have a couple of conundrums to consider.

The first is the bridge. 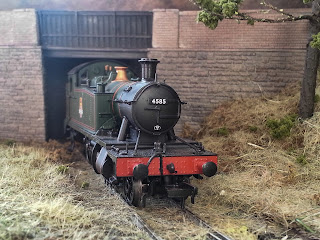 Now as far as I can ascertain I got the dimensions absolutely right, but it doesn't look it, does it? Now some of this is down to taking photos of a small layout with inappropriate cameras, which is very tempting because a wide angle lens has lots of benefits when trying to take photos inside a very small box. You'll have noticed that in some photos of the station it looks like I've forgotten what a right angle is, but trust me that is mostly down to barrel distortion of the lens used. Mostly. On the other hand this is a very small bridge which wasn't designed for large locos.  Bearing in mind that LM didn't feature a bridge in reality, but one is needed as a scenic break, should I be prepared to go down the "based on" route rather than being strictly prototypical?

The second issue is about lineside fencing.I know I need some, and it should be post and wire fencing, but again what compromises should I make, especially where the "wire" is concerned? In the past  I've used wire, I've used plastic rod and I've  used nylon , but all of them seem to be not quite right somehow. Any ideas?
Posted by James Finister at 03:10