You know I think the end is in sight?

Which is odd because so many things went wrong yesterday. Today though the sun is shining, I don't have to think about work, and the step son has actually done some chores.

More to the point some things yesterday did work, and those that went wrong have taught me some lessons.

So what worked? Point rodding is one of those things I wasn't seriously contemplating when I started this project but you can't look at a picture of a Tanat Valley station without realising how visible it is. I still wouldn't have contemplated it if it had involved folding up minute etchings, especially since most point stools on the TVR only carried two or three rods. Thankfully MSE do white metal point stools that can be cut down. They are also one of the many model railway traders I've had excellent service from this year, along with Modelex, eHattons and others.

I was rather pleased with myself when I came up with the idea of gluing the castings to 3mm plastic strip to ensure they were lined up and evenly spaced. 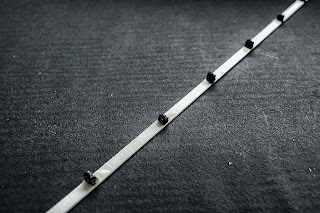 It was at this point that I thought it might just be worth looking at the etch for cranks etc that MSE do so that the rods get fed into the signal box in a believable way. 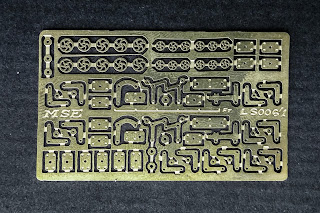 My, these are small, especially when you have my poor eyesight and depth perception.

After much cussing and spilling of superglue I've managed to lash something together but I would definitely do it differently next time. If I get round to the next project I'll enlist the help of a few people I know who are experts on the subject. I also broke a couple of drill bits in the process, which is what led to most of the cussing.What I didn't tackle is the signal pulleys, but then there are no signals on the module as it stands. My understanding is that at Blodwell Junction there was no starter signal at the the signal box end of the loop, the right away being given from the signal box, which you will recall is actually a ground frame.

Where I literally came unstuck is that there is a suggestion in the instruction that a short piece of the NS wire is glued on top of the stools once the rods have been installed to represent the top roller. Visually I think this would make a great difference, but I spent hours last night trying to do it and no matter what glue I tried I couldn't get the wire to stick.

I'm going to do some more experimentation off line, because if I can get it to work I think it will be a massive visual improvement, but a search on the web suggests that nobody else bothers with this refinement which at least made me feel a bit better.

I addressed the ballast problem by use of a mix of spray cans including  Halfords grey primer and Modelmates slate grey and oily brown.It isn't great but it is certainly better than it was, and has convinced me that chinchilla dust is the way forward. Incidentally I also use the Modelmates sprays to add some visual texture to the goods yard and the platform. In both case I know I will be layering proper textures on top, but psychologically it has removed the last trace of un-sceniced baseboard from view.

This is where I sit back and reflect. The whole point of building this module was to try out techniques knowing that they might not work but if they didn't I could live with it or rectify them without too much effort.
I think that is still valid but if I did it again I would start with a bigger module, possibly one that could be eventually included in the final layout.

The jury is still out on whether it would have been better to build to EM gauge from day one. As things stand I still don't know if I can build workable EM gauge track and there seems little point in buying OO gauge items to run on it knowing that at some point I'll need to convert them to EM gauge. Actually it is more subtle than that, the issue is how much work do you do improving an OO gauge model if you know eventually everything below body level will be replaced anyway. For instance I splashed out on a Bachmann suburban Mk1 brake coach. Leaving aside that this never would have run on the TVR it is fairly clear having got my hands on it that everything below body level needs replacing. If I'd built to EM from day one I would just plough in and do that using a Comet underframe kit, but instead I'm thinking about a piecemeal improvement project that I know still won't produce the right final effect.

I'm in danger of ending this on a negative note, which I don't intend to. The truth is I've learned, and re-learned, a lot by building this little diorama. I'm trying to catch up with 25 years of finescale 4mm modeling that I've missed from playing with garden railways. Borrowing techniques helps enormously but there is no substitute for actually trying things out for yourself.