I did some work today on both the overbridge and Porth-y Waen ground frame. I'm at the stage of building throwaway test pieces to check that I'm on the right lines. Helping this approach is the use of building papers from two sources, Scalescenes and  Clever Models which once purchased can be printed off endlessly, so mistakes are cheap.

Whether I stick with card going forward is another question for the future. As far as this incarnation is concerned I think I will, but I'm already considering options for the Mk 2 version. I've already got a wish list of features I want to include as part of the learning process that I think would be over ambitious to include in this version if I want to get it basically complete by the end of the year.

The biggest of these must be the shift to EM. To get some idea of the visual impact of this I downloaded Templot 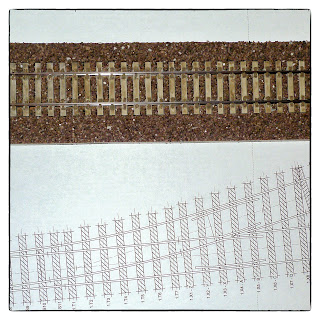 And here you see a comparison of the Tilig track compared to an EM turnout plotted by Templot. Depressing, isn't it?
Posted by James Finister at 04:32