As promised yesterday here are some details of one of my alternative schemes for filling up an Apa box. In this case a 16mm quarry using Faller e train track, a battery powered Simplex loco built by Brian Dominic from an old Saltford models kit, and some Andel quarry wagons 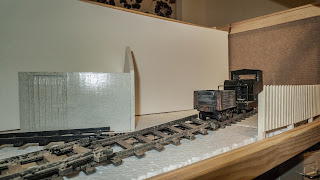 My original plan was to build the units to be operable without any sort of fiddle yard, but I've given up on that purist approach, which makes this scheme a bit more worthwhile. If I really put some effort in to it I reckon I could the 16mm scale layout up and running over a weekend, but what would be the fun in that, so for now it remains an idea for the future.