I've been feeling rather guilty for the last week for not having made progress on the baseboard. In my defence I've spent a lot of time thinking about building it but I've kept coming across little problems with my plans. Some are real, some turned out to be less of an issue than I first thought, and some still caught me off guard.

Also in my defence I give you Exhibit A: The baseboard. 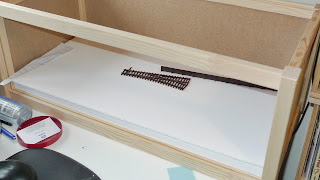 Trust me you don't want to get any closer than that. I seem to have lost the knack of cutting a good clean edge.

It is made from 5mm thick foamboard - sometimes called Kappaboard but I actually used Gerstaecker's product which worked out to be the cheapest option I could find. A simple 5cm deep tray with diagonal bracing underneath assembled with a hot glue gum and the aid of FoamWerks L-clips to keep things sort of squarish. Sadly at 65cm in length the boards are not quite as wide as the full interior space of the Apa box. That means there is a 4mm gap at each side. If I had thought about this even for a minute the solution would be obvious; just use two sections of board rather than one with a joint in the middle. If I keep the layout as a self contained diorama it isn't an issue since the backdrop will sit in front ot the gap, but if I'm going to allow for connection to some sort of fiddle yard at one or both ends then I'm going to have to do something about it.

If I were to follow my own advice I would throw this version away and re-do it.

However, when did I ever follow my own advice?

The truth is it sort of helps sort out another problem I had because the gap makes it easier to remove the sub-base to work on it. Useful as I'm expecting to do the bulk of the work on it outside of the Apa carcass. My long term solution to the issue is tied in to the construction of the fiddle yards, which will also be designed to fit inside Apa boxes. That is, if I build the fiddle yards.

You might have noticed that the baseboard is deeper than the wooden stringer at the front of the box, and also that I've built in an overhanging lip. The lip will get reinforced and will be the key to fitting the baseboard in and out of the box. The depth is to allow for a point motor to fit. The Tillig point motor is quite shallow and might just have fitted if I'd made the board flush with the wooden bar, but I would rather give myself a little more space to work in.

I'm having second thoughts about the point motor anyway. My main reason for using it is a proof of concept to myself about using DCC operation  of turnouts, but in the interests of simplicity of both construction and operation I'm tempted to use a manual rod-operated  control built from a DPDT switch, with the rod exiting at the front of the board.

I'll leave you with a picture of some track and stock in place whilst I mess around with the final track layout. What did I say in my last post about not using the Model Rail Sentinel? 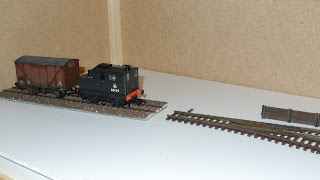